skip to main | skip to sidebar

Here is episode - 19 of THE WEATHERVEIN... Enjoy!
Posted by Greg Nordstrom at 9:29 PM No comments:

Here are two great blog posts from yesterday's Nor' Easter! The first one is from by good friend Devin Toporek and his thoughts from the NYC... The second one is from Dr. Jeff Masters and his thoughts of the overall storm... I also added some great video/pictures from my friend Scott McPartland... He captured an amazing thunder snow shot! Enjoy!
Devin Toporek - NEQ
Dr. Jeff Masters - wunderground
Scott McPartland - Severe Weather Photography
Posted by Greg Nordstrom at 9:02 PM No comments:

Really rough numbers at this point, but this is what I have been hearing so far:
Regan National - 5" / Dulles - 9"... Over 300,000 people without power across the DC metro! Also, commute home took 4 hours + for many! Crazy!!!
Philly: Haven't heard anything official, but it seems like many areas are approaching/surpassing 1 foot now as the precipitation is about to end... Actually just saw on twitter that Philly International just hit 14"... WOW!
NYC: Several reports of thunder snow and 2-3" per rates rates right now! Some people already approaching a foot in the suburbs, with final totals over a foot for most, with some totals possibly nearing 16-18"... Amazing!
Boston: Snow just starting to get heavy, with over a foot expected for most! Wouldn't be surprised to see many 16-18" reports, if not even a little more! Crazy!
Bottom line, this storm overachieved, but hey, what's new with snow and the Northeast this year! I thought a foot of snow was possible, but not 18" + amounts we really may see! Amazing if you think about it! 09/10 & 10/11 are the back to back years of the Nor' Easter!!!
Posted by Greg Nordstrom at 11:13 PM No comments:

Here is episode-18 of THE WEATHERVEIN... Enjoy!
Posted by Greg Nordstrom at 7:27 PM No comments:

Just wanted to give everyone a heads up that Devin and I will be recording a weathervein tomorrow night! It has been a long time, so I'm excited about it! We'll be talking about the upcoming coastal storm for the South, Mid Atlantic, and Northeast US... Also, I'll go ahead and say this right now, don't sleep on that upper level low moving through the Deep South Tuesday night! Some areas could get a quick couple of inches on grassy areas mostly! Something to watch without a doubt! We will get into a lot of weather tomorrow, so make sure you check out the weathervein! It will probably be up around 8pm or so...
Posted by Greg Nordstrom at 6:20 PM No comments:

I was very sick for almost a week, so sorry for the lack of posts! I have to be honest, with the amount of work I have to get done by May 1st, I probably won't be able to post as much as I would like! However, I will post as much as I can... I'm probably only going to keep this a Monday-Friday thing until I either get my work all done, or things calm down! If there is something big to talk about in weather, then of course I'll do my best to post! See you Monday!
Posted by Greg Nordstrom at 8:15 PM 2 comments:

Here are two great blog posts on another BIG Nor' Easter for New England... Enjoy!

2) The WeatherMatrix Blog
Posted by Greg Nordstrom at 8:06 PM No comments:

We only got about 3" here in Starkville, MS yesterday, as heavy sleet mixed in for several hours before the switch to all snow... Travel maybe 25-50 miles north, and you saw much higher snow totals, as it stayed all snow! The highest total I saw from yesterday's Deep South snow storm was near 11", so obviously the the potential was there... Refining your forecast by 25-50 miles is really tough, especially when maybe a half degree aloft was the difference between 3" and 6" of snow... I'm still very happy with the snow we did get, and I really hope we don't have to wait another 11 years for a decent snow in Starkville! Personally, I would love to someday see us top that 8" mark we saw in January of 2000... I'm sure it will happen, I just hope it's someday fairly soon! 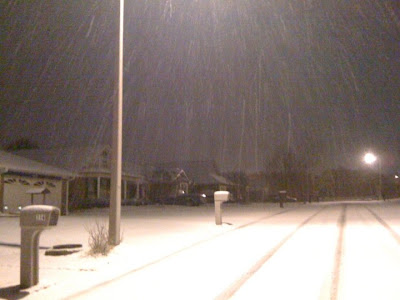 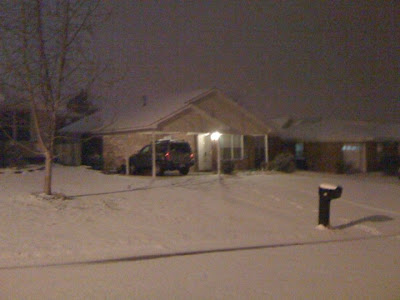 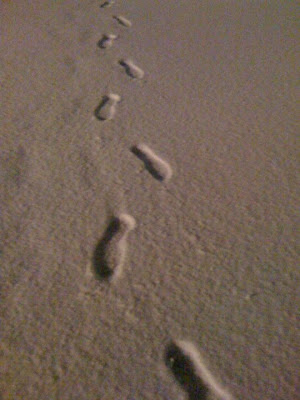 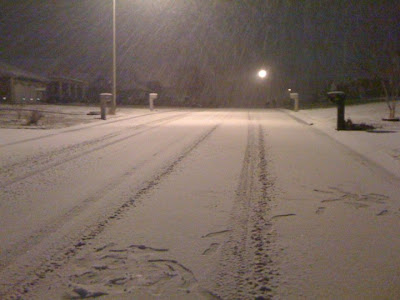 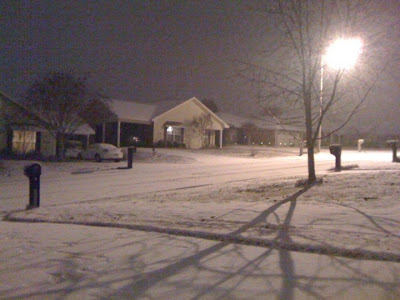 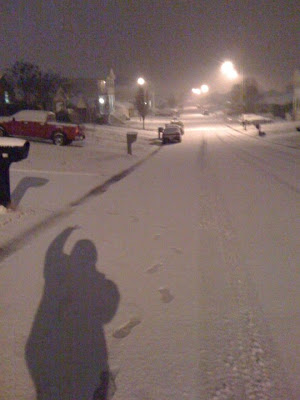 Posted by Greg Nordstrom at 5:19 PM No comments: 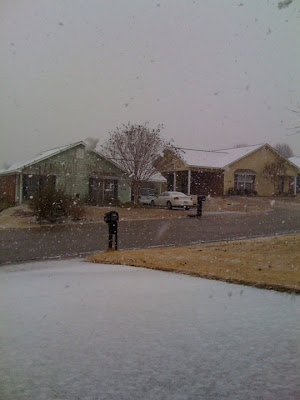 My thoughts really haven't changed much, as everything is coming together well... Still feel like a little stronger than forecasted low will form and track along the northern Gulf of Mexico without tracking inland! This will keep Starkville mostly in the snow, even though it could end as a brief period of freezing drizzle as we lose moisture in the snow growth region... I'm sticking with around 6" for us in Starkville, even though I wouldn't be shocked to see some areas approaching 10" in the quote, "sweet spot". At 7pm, GTR is already down to 34 degrees (19 degree dewpoint) with clear skies! The clouds shouldn't get in Starkville until near dawn, so as I stated yesterday, this is great news for snow lovers! To the north, dry air is filtering down, which will only increase evaporational cooling, helping Starkville stay almost all snow throughout the event! It really doesn't get much better than this for snow in the Deep South!
The only question I really have at this point, is how much QPF do we get in Starkville? There is a significant difference between the GFS and the NAM at this point. GFS = Nice Snow... NAM = Historic Snow... I am worried about some convection along/near the Gulf of Mexico cutting off our moisture source, but either way, this is going to be a decent snow for us in Starkville! Amazing omega forecasted in the snow growth region combined with the best overall dynamics near Starkville can potentially lead to a historic snowstorm! I'm going to stick with 6", but again, I really wouldn't be shocked if it was more! Like a lot of things in weather, it will come down to mesoscale processes that NO ONE/NO MODEL can see at this time! Either way, the snow is coming to Starkville! :-)

Posted by Greg Nordstrom at 6:51 PM No comments:

I wanted to post some thoughts on this Sunday's possible snow! I honestly don't really care what the models are saying, even though of course I'll follow it, but to me it comes down to one thing, the track/development of the surface low! I have said for days, that I feel like a more southern track is likely! Things like a +SOI, -NAO, and maybe some left over extra rising motion in the tropics says south! I personally feel the low will develop and stay over the extreme northern Gulf of Mexico, and not track inland... If this happens, which I really think it will, then Starkville will get snow, period end of story! How much? Well, that's still hard to predict!

With the more southern track, I also think it will be a deeper/stronger low! A nice baroclinic zone should setup right along the northern Gulf of Mexico! A stronger low does two things! 1) More WAA, which is not typically what you want to see in Deep South snow setups! 2) More dynamic cooling, due to heavier precip amounts! This should basically cancel each other out, and I really think Starkville is going to see its first significant snow since January 2000 (Saw 6-8")... If I had to guess, I'll say around 6", which is huge for us in Mississippi!

One other big key is the winds near the surface! If we have a southerly surface wind Sunday, NOT GOOD! I'm sorry, but this is the Deep South (typically very marginal setups), so a south wind is not going to lead to much if any snow at all... Northerly winds at/near the surface, then we are in business! This will bring in extra cold/dry air which is insurance for us on an evaporational cooling standpoint! I promise evaporational cooling will be key, like the big snow in Jan. 2000... Also, I'm hoping we see enough clearing Sat. night that temps drop lower than forecasted! If it is overcast by Sat. night, that will hurt! Again, these simple observations is what will dictate Sunday's snow threat, not what the models are saying at this time! It's impossible to see these details this far out (still ~48 hours out)... Trust me on that!

The good news for travel, is the ground is fairly warm. I think 6" totals in grassy areas will be common, but main roads shouldn't be horrible at first... It will take awhile for the snow to start sticking on the roads! It will hold off, but eventually heavy precip rates will overcome the roads as well... I'm going to drive around town to see how everything is going (Did that in 2000, which was CRAZY!), but if you are not used to driving in the snow, I wouldn't recommend going out! If you do, please don't slam on your brakes! This is why I love my manual transmission in my Xterra! HUGE for snow driving! More updates to come....
Posted by Greg Nordstrom at 5:09 PM No comments:

Any of my posts/vidoes published in this blog express my thoughts and opinions and are not necessarily those shared by Mississippi State University or the Deparment of Geosciences...